Every year, thousands of people attempt to climb Mount Kenya, but the majority of them only make it to Point Lenana (4,985 m), since reaching the summit, which is crowned by twin icy peaks known as Batian and Nelion, needs skilled and prepared climbers.

The climbing season generally runs from July to early October. There are about 30 technical routes to the summit, but the most common is on the South East Face, which is approached via the Chogoria path. This climb will take at least 5-6 days to complete. The final ascent to the summit necessitates a steep ascent of a tarn before crossing the massive Lewis Glacier to reach Nelion. A crossing to Batian is made the next day. An ascent of the north face involves a direct attack on Batian, with an overnight camp at Firmin Tower’s base.

Contact one of our travel specialists to begin preparing your custom safari. 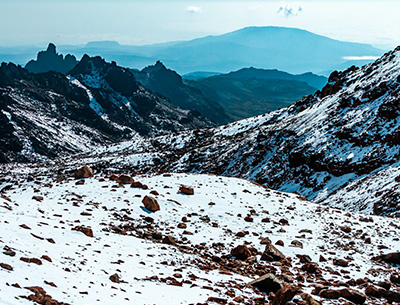