Mount Kilimanjaro National Park is one of the highest walk able summits on the planet & a beacon for visitors from around the world. In fact the area raises in absolute isolation at 5,895m (19,336ft) with the greatest peaks being Kibo and Mawezi.

Most reasonably fit and properly guided climbers can experience the triump of reaching the crater rim with little more than walking stick, warm clothing and determination. Climbers who reach Uhuru point, the lip of the crater (Kilimanjaro) is a dormant, but not extract, volcano, will have earned their climbing certificates and their memories. There is however so much more to Kilimanjaro than summit. A journey up the slopes takes visitors on a climatic world tour, from the tropics to the arctic. The grassy and cultivated lower slopes turn into lush rainforest, inhabited by elusive elephant, buffalo and antelope. Higher still, health and moorland, covered with giant heather, becomes a surreal alpine desert and, finally there is ice, snow and the biggest view on the continent. December to February is the warmest and clearest time to visit, with July to September being colder but also dry. It is wet in the rainforest from April to June and during November. The best time to visit this park is during the dry season from  July to February, when there’s little chance that the forest will be flooded.

These sample tours will give you an idea of what to expect when either traveling to Mount Kilimanjaro National Park or how we incorporate Mount Kilimanjaro National Park with the other destinations in Tanzania. Please note that the following tours are meant to inspire you since your safari will be tailor-made by our travel experts to fit your needs and preferences within this destination. 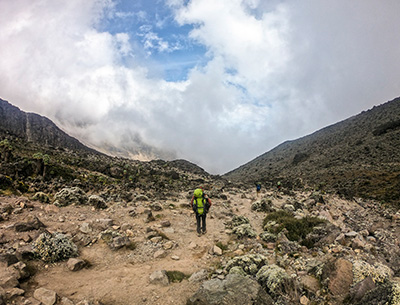 With views of the Kilimajaro and the endless plains of the African savannah, Kambi ya Tembo is a spectacular camp situated on the north face of the Kilimanjaro with fantastic views of Amboseli and where one can enjoy the wildlife in the front line.